Are you ready to cross-over into the world of vertical skydiving? VFS team Arizona X-Force will be hosting a camp tailored to beginner Free-Flyers. All members of the 2019 World Cup medalists team will be present, and are eager to fly with you.

To sign up, please contact brianne [at] axisflightschool.com and find out if there are slots available. If so, you will be sent a link where to pay the registration fee using Square./p>

Arizona X-FORCE members Brianne Thompson and Niklas Daniel held a tunnel skills camp that spanned over two days at Windobona in Berlin, Germany. The camp's participants worked mostly on individual flying skills ranging from belly to head down and the transitions in between :)

We would like to thank all the campers who attended, and the WIndobona staff for being so welcoming and accommodating.

The 22nd FAI World Cup of Formation Skydiving was held at Skydive Arizona in Eloy from October 7th to the 12th. Arizona X-Force attended after having just completed the USPA Nationals in mid September.

The competition started out strong, with the top three teams being neck and neck. As time went on, the field started to widen. The Russian team, Vertical FlyStation, and SDC Core (USA) took the top two spots.

Having medaled in both events, Brianne is the first American and third person in skydiving history to medal in FS and VFS at the same World level competition. This feat was first accomplished by the Lemay brothers of the Canadian National Team Evolution in 2014.

During the 2019 USPA National Skydiving Championships Arizona X-Force came in second in the 4-Way VFS Open event. The vertical formation skydiving event completed all 10 scheduled rounds, with four teams in each of the open and advanced divisions. One team, "Why Not", competed in the intermediate devision.

X-Force â now in its second year with the current line-up â scored a 16.3 points average, a lower score than last year, however flying at a faster pace - 18.9. The team used this years USPA Nationals as a training camp leading up to the World Cup which will take place in the first week of next month in Eloy, AZ. The team plans to peak next month, having a better understanding of what the judges will be looking for and enforcing.

X-Force did walk away from this years Nationals with a new personal best, a highest scoring round of 24 points in round 9. This round got busted down from a 33. SDC Core once again took the gold medal and Arizona Anthem took bronze. To view all scores and competition videos, check out Omniskore.

Arizona X-Force would like to thank all of its sponsors and supporters for making a successful 2019 season possible, and congratulate its fellow competitors for a great competition!

After 4-way VFS concluded, Nik tossed his hat in the Speed Skydiving ring. Having previously competed in the discipline two years earlier at Skydive Perris, his main goal was to reach a new personal best â breaking his top speed of 443.32kmh / 275.5mph. Nik accomplished that on six out of the eight rounds, reaching a new top speed of 465.6kmh / 289.3mph in round 3. To view all scores, check out Omniskore.

Coming in 5th, Nik's performance earned him a spot on the USA Team. The 2020 World Championships will be held in Tanay Siberia, Russia.

X-Force arrives in Reaford to participate in 4-Way VFS Open!

The 2019 USPA Skydiving Championships are being held at Skydive Paraclete XP, Raeford, North Carolina on September 11th â 27th. Arizona X-Force will again attended with its current line up, established in early 2018. They will be competing with SDC Core, SDMW Chemtrails, and Arizona Anthem for the medals in 4-Way VFS open.

September 11th was dedicated to registration and training jumps (see below).

X-FORCE member Brianne Thompson is the fastest female in the world!

At the beginning of April, the FAI issued certificates to Brianne Thompson for the following World Records and two National Records

In anticipation of the 2019 USPA National Championships (in North Carolina) and the 2019 FAI World Cup of Formation and Artistic Skydiving (in Eloy), X-Force continue to regularly hit the tunnel.

New Highest Scoring Round of 46 Points

X-Force set a new team record at the 2019 US Indoor Skydiving Open National Championships when they scored their highest scoring round of 46 points. 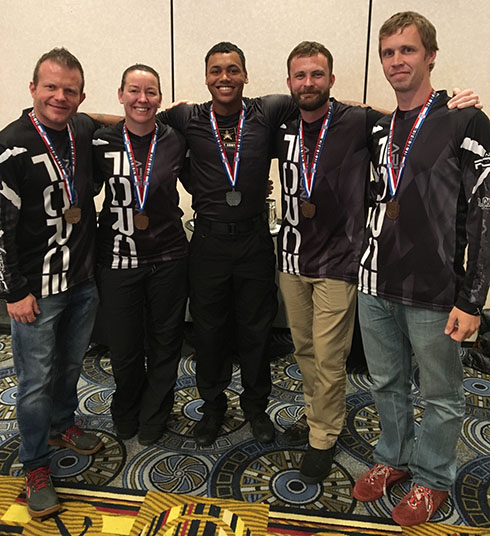 Arizona X-Force had a strong showing with two new team bests: its highest indoor average of 26.1 points over 10 rounds, and single highest scoring round of 46 points in 35 seconds.

The team's next major competitions will be the USPA Skydiving Nationals in Reaford, NC at the end of September, immediately followed by the FAI Skydiving World Cup in Eloy, AZ in early October, which the team qualified for at last year's nationals.

Our season recap is filled with indoor and outdoor training footage, competition, bloopers, and other various outtakes. Special thanks to all our sponsors and supporters for making our 2018 season possible. 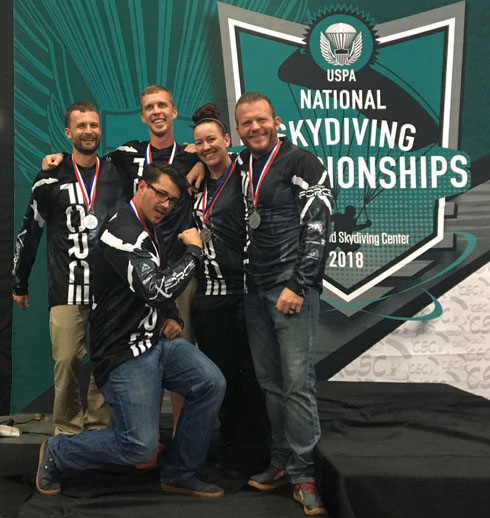 During the 2018 USPA National Skydiving Championships Arizona X-Force came in second in the 4-Way VFS Open event. The vertical formation skydiving event completed five of 10 scheduled rounds, with five teams in each division.

X-Force—only in their first year with the current line-up—scored an 17.8 points average, setting a new best for the team, and 22 points in their highest scoring round. SDC Core once again took the gold medal and the Golden Knights took bronze.

Arizona X-Force would like to thank all of its sponsors and supporters for making a successful 2018 season possible!

Arizona X-Force would also like to thank and congratulate its fellow competitors for a great competition. A special shout out to all who participated in the intermediate test event. We welcome the new devision and look forward to having increased participation.

I understand and agree